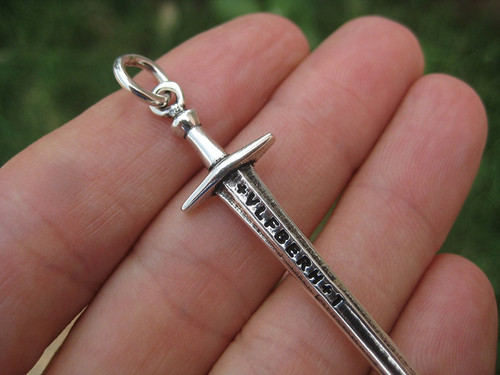 This is a gorgeous 925 Silver Ulfberht Viking Sword Pendant Necklace. It is stamped 925 Silver. Ulfberht Some History of the Sword: Ulfberht swords were made in Europe between the 9th and 11th century most numerous lay found in northern Europe in Norway. Only about 170 were found. It was a very advanced sword for its time with about three times as much carbon content of that another swords. It was much stronger and more flexible as well as lightweight with almost no impurities. It was thought before the Ulfberht sword was discovered that the ability to remove this impurity ,know that slag, to such a degree was possible during the Industrial Revolution because heating to 3000 degrees was needed to accomplish this. However the blacksmiths, who made the Ulfberht, accomplish this 800 years earlier.