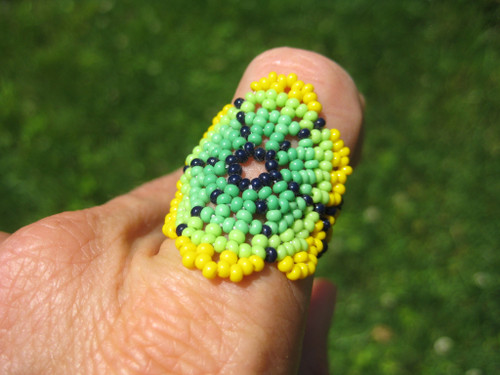 This is a beautiful beaded ring made by the Huichol Indians that I got on my recent trip to Mexico. The beading and the design is quite precise.

Making this  ring was a very time consuming and skillful process.

The Huichol Indians are a group of Native Americans living in central the Mexican region of Nayarit, Zacatecas, Durango and Jalisco. They are descendants of the ancient Aztecs. They are commonly known as the Huichol but refer to themselves as the Wixaritari (  The People ).

Once a year they return to there ancestral homeland of San Luis to perform spiritual Peyote ceremonies.

The Huichol primarily have subsisted on farming and agriculture. Many turned to working in the tobacco fields but the pesticide use in the tobacco farming was injurious to many peoples health. Fortunately many of the Indians were able to start to supplement their living making and selling their arts and crafts.

Their religion consists of four major deities. The trinity of corn, blue deer and Peyote, and the eagle all of which descended from the sun god. Peyote rituals are an important part of their culture and art inspiration and there has been efforts directed toward the Mexican government to continue to allow its use for these native Indians for spiritual and religious purposes.

The Huichol art is a reflection and expression of their religious and cultural tradition.

I encourage one to study and learn more about the Huichol Indians as they have a fascinating history and culture.

Size: 7-9 US the ring is slightly flexible and is comfortable  between these sizes