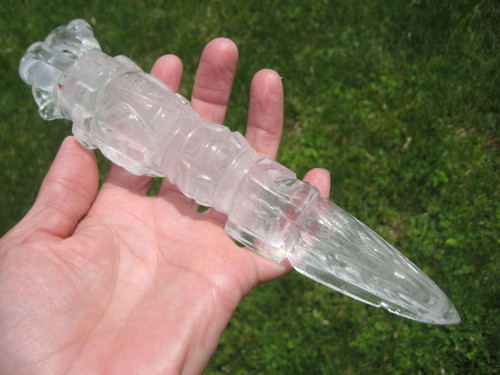 This is a pretty Quartz Crystal Phurba Dagger from Nepal.  It has very nice detail and was carved from mostly clear quartz with a few areas

with interesting natural inclusions inside the crystal.

One large inclusion is quite noticeable but the piece was not broken, I examined it under a magnifying glass for this to be sure.

The Phurba is known as a magical dart to keep your foes at bay and also to ward off evil and dispel negative energy. It has beautiful carving of three faces. The faces of Vajrakila or Vajrakilaya. Vajrakilaya, or Kila, means something sharp and something that pierces,like a dagger. A dagger that can pierce anything but can not be pieced by anything. The magic of the Magical Dagger,or Phurba comes from the effect that this material object has on the spiritual world. The art of Tantric magicians or lamas lies in their visionary abilities to comprehend the spiritual energy of the object and willfully focus it in a determined direction. Traditionally the tantric use of the Phurba included curing disease, exorcism, killing demons, meditation, and creating weather changes. I believe it may be applied to enhance the minds focused prayer on anything. The blade of the Phurba is used for the destruction of demonic powers and the top end is used by the tantricas for creating blessings.

No real chips or damage

A protective box will be included. The string latch was broken on the box so it does not latch shut.

.925 Megalodon tooth Pendant Necklace with Turqouise and Amber, Taxco A8365